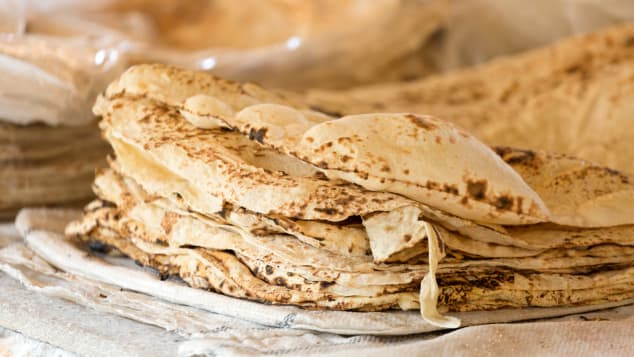 (CNN) — What is bread? You likely don’t have to think for long, and whether you’re hungry for a slice of sourdough or craving some tortillas, what you imagine says a lot about where you’re from.

But if bread is easy to picture, it’s hard to define.

Bread historian William Rubel argues that creating a strict definition of bread is unnecessary, even counterproductive. “Bread is basically what your culture says it is,” says Rubel, the author of “Bread: A Global History.” “It doesn’t need to be made with any particular kind of flour.”

Instead, he likes to focus on what bread does: It turns staple grains such as wheat, rye or corn into durable foods that can be carried into the fields, used to feed an army or stored for winter.

Even before the first agricultural societies formed around 10,000 B.C., hunter-gatherers in Jordan’s Black Desert made bread with tubers and domesticated grain.

When your Armenian mother-in-law comes towards you wielding a hula hoop-sized flatbread, don’t duck: Lavash is draped over the country’s newlyweds to ensure a life of abundance and prosperity.

To shape the traditional breads, groups of women gather to roll and stretch dough across a cushion padded with hay or wool. It takes a practiced hand to slap the enormous sheets onto the inside of conical clay ovens, where they bake quickly in the intense heat.

The bread is so central to Armenia’s culture it’s been designated UNESCO Intangible Heritage.