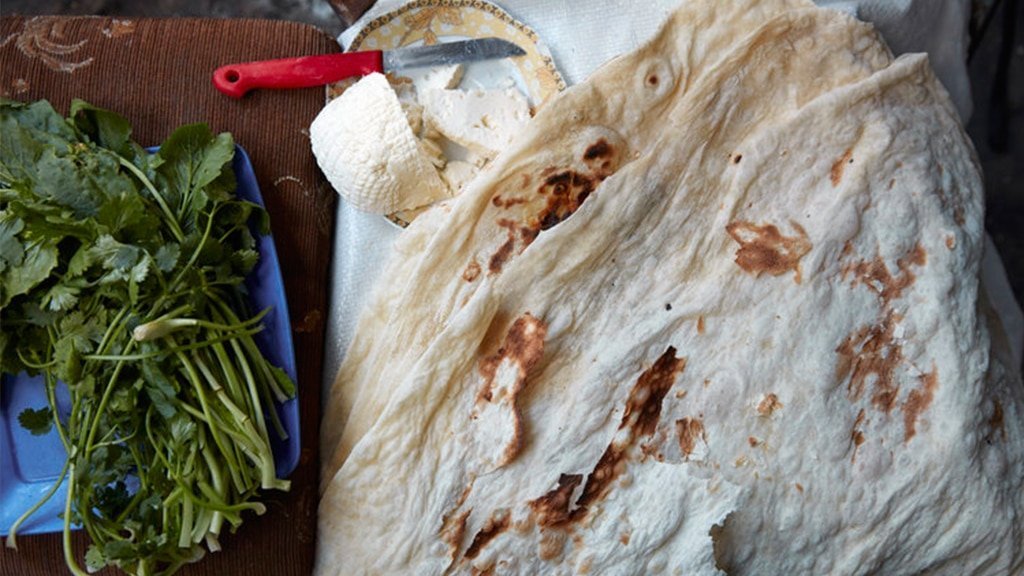 In Yeghvard, a village outside of Yerevan, home bakers offered us a platter of cheese and herbs to eat with the fresh lavash they were making.

The first lavash we ate after arriving in Yerevan came from the corner store near our rental apartment. It was pale and paper-thin, but durable enough to wrap it around scrambled eggs and cheese. This lavash wouldn’t be the lavash that changed our lives, but it served an important purpose: refueling our brains after two days of airports, layovers, and plane seats.

The “we” in this story comprises Ara Zada, a chef, John Lee, a photographer, and me, a food writer. Our admiration and interest in Armenian food is what brought us together to form the team behind the cookbook Lavash, to be published by Chronicle Books in 2019. Ara grew up going to an Armenian school in Southern California, but he wanted to dig deeper into his heritage. John got to know Armenian food—especially lavash—while teaching a food photography workshop at Tumo, an after-school digital media and cultural learning center for youth in Armenia. And I got hooked in college while writing thesis on food and Armenian cultural identity. Through friends and Tumo’s global network, we met up and set out to create a cookbook about Armenian food, with lavash firmly at the heart of the story.

Why lavash? It’s the most culturally important bread in Armenia, added to Unesco’s intangible cultural heritage list in 2014. The act of baking lavash has also been documented in countless paintings. In the 1970s, President Gerald Ford even selected a print of “Armenian Ladies Baking Lavash” by Armenian-American artist Manuel Tolegian for the White House Bicentennial Collection.

Yet lavash is also painfully misunderstood outside of the Caucasus. (One English-language cookbook suggested that tortillas make a good substitute—they don’t.) Even the factory-made lavash we ate for breakfast, which came in a plastic bag, was miles ahead of the flatbread’s imposters we had sampled back home. But it wouldn’t be the last lavash we ate, either. If we wanted to learn how to make the real thing, we were going to need to venture much farther than the corner store.

The first stop: GUM Market, a large covered market near downtown Yerevan. In addition to the bright rows of dried fruit and nut vendors at the front of the market were tables stacked with large sheets of lavash, some were thicker and more blistered while others were light and tissue-thin. Periodically, the women sprinkled water over the stacks of bread using a water bottle with holes punched in the lid. This helped refresh the bread, keeping each sheet pliable. That’s one of the great things about lavash: all it needs to come back to life is a splash of water.

We started talking to the women. “Why does this bread have so many blisters?” we asked. It’s baked in a tonir, they answered, referring to the subterranean clay oven heated with a wood fire at the base. Like naan in a tandoor, bakers stick lavash to the sides of the oven to bake it, which gives it irregular blisters. In comparison, factory-made lavash is much more uniform in color.

“Does the bread have yeast?” “Yes, drozhzhi,” they said, the Russian word for yeast. Was it commercial yeast or something more like a sourdough starter? That they couldn’t tell us.

If the women selling lavash at GUM could share part of the story, the rest could be gathered at a tonir village, a place known for the goods it makes from a tonir. But when we arrived in Argel, a village about 20 minutes outside of Yerevan, the women were taking the day off from baking. Instead, they were busy hanging strands of arishta, a pasta made from a salty flour-based dough, out to dry on clotheslines.

We drove instead to Yeghvard, a nearby village, where a friend said her neighbors were baking lavash to prepare for winter.

The large house had two green houses in the back while the floor of the entrance and the roof were covered in bedsheets. On the sheets were rows of just-baked lavash, drying in the open air. Between the house and the greenhouses, a tonir smoldered away, surrounded by four women, each with a different job, from shaping, to rolling, stretching, or baking the bread. To remove the bread from the wall of the tonir, one of the women used a hook to fish it out, letting it cool for a few seconds before stacking it on top of a pile of baked lavash.

The bakers handed us strips of warm lavash and pulled out a plate of salty cheese, cilantro sprigs and skinny green onions to eat with it. Slightly charred and warm, this lavash was in a different league from the store-bough lavash from our first morning—chewier, less fragile, and deeper in flavor.

The women explained that they’re neighborhood friends and always get together to help make lavash in the fall, but only to eat for themselves, not to sell it. Once it’s dry, they stack it and store it in a spare bedroom. We took a look: there was enough lavash in the house to stock all of GUM Market.

“Do you add yeast?” we asked. Yes, yes, they said, and then dictated their recipe. We ate a few more lavash wraps before thanking them and heading back to Yerevan.

A few days later, we returned to Argel on baking day so we could see the village in action. The women had similar roles as the women in Yeghvard, with an addition: One manned the shop, counting out change with an abacus when men rolled up in vans to purchase piles of lavash to resell elsewhere. It was a cold morning, so the bakers invited us to with our legs dangling in the hole next to the tonir to warm our feet while they got ready to start baking.

Do you add yeast?” we asked the woman mixing dough a large, old mixer fitted with a dough hook. Yes, she said, but she also saved dough from the day before and mixed it into a new batch. Why? We asked. For flavor and texture, she explained. She then covered the dough with a jacket to keep it warm while it rested in between mixes.

We then stayed quiet, not wanting to interrupt while the women cranked up the fire and settled into a fast-paced rhythm of rolling, streching, and baking dough.

When it was time for a break, one of the bakers walked to the back of the shop and pulled out a pot of hot, boiled potatoes and some pickled beets and peppers. We wrapped the potatoes around the lavash. Without expecting much, we took a bite.

On our trip back to California, we packed lavash so we could keep enjoying it while we worked out the recipe. Like the lavash at GUM market, it rehydrated easily after being misted with water. That precious supply, however, is gone. And now the real work begins– recreating that same lavash satisfaction, but this time in America.